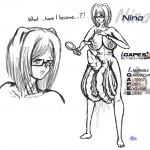 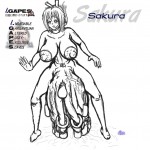 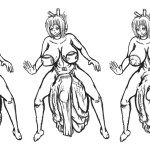 Misaki + Natsumi – Was going to be a twin thing going on, one being bigger and friendly while the other being more dominant… then came to the thing of it being sisters… and hints of incest and… No… >_< made myself hate this picture, lol – Also pulled down tits and veiny cunt from ring… had a bondage thing going on here on undertoned body types.

Nina – Representing more the bio horror, all I can see is horror in the doodle and it’s mistakes!, still… something to be said for triangle clit, multi gapes and nipple pussies…. but yeah… horrid pose here. THE HORROR! *sets fire to it*

Sakura – Basic idea after drawing her was the idea of a early iG pop sensation ‘coming out’ that she was this way from secusion, making another turning point. But … stuff. Should use the weighted rings to pull pussy down more me thinks!