Gathered Research on the item known as the Hybris Egg

In a Nutshell, What is a Hybris Egg? – A hybris egg is a cocoon like orb which contains inside a substance called ‘hybris’. Hybris changes females and transforms their minds and bodies into extremely sexually focused designs, usually with very pronounced orifices and features.

The growths usually protrudes her vagina, loosens her anus, sometimes swells her breasts; making her body grow and change at an alarming rate once the hybris is inside her.

[The hybris egg is meant to be something beyond human understanding, where it came from and why it exists. The egg is meant to represent something unknown that ‘transforms’ females; neither good or bad, but instead have just blindly been used for the sexual changes. From a fetish point of view, the ‘controlled’ and ‘orderly’ changes are meant to feel alien (more ‘unknown to our way of being’ then Sci-Fi Aliens monsters), yet naturally able and massively deforming all at once.]

Appearance – The hybris egg is an unusual orb like creation. Judging from its looks, it does not appear to be manmade, yet no absolute answers to what it truly is have been discovered. INSERT IMAGE OF EGG (to come)

Epidermis and Weight – The outside of this egg is quite firm and solid and highly resistant to any form of force applied to it. It’s a little ‘rubbery’ to touch and is fairly light, similar to that an average 330ml soda can.

Hybris Inside – Inside the egg lies the hybris itself. The egg alone is worthless, but inside contains the greatest prize of all. The hybris inside will function for roughly 12 / 24 hours with the ability to change a woman before it becomes oxidized by the air.

This means refining the hybris liquid is not a possibility, as without a ‘container’ for the substance, it spoils quickly in our oxygen rich world. This makes the egg an essential part of mass distribution from a business perspective, even though they are not physically appealing.

Reacts to female hormones – The hybris egg itself just acts as a protective barrier for what it contains. However it cannot be accessed without female hormones in her love juices. Reacting only to the chemical hormones and scents of a female though their ejaculate, the egg release its contents. Over the years, there still have been no other ways for the hybris to be released from these eggs successfully.

Damaged goods –Scientists investigating the eggs found that attempts to puncture, open or dissect the egg like orbs made egg expel liquids quickly before its rupture. This is a counter measure defence like mechanism to keep the hybris safe. These chemicals merge with the hybris, transforming its properties into that of ‘slime’. This slime is just that, slime. The properties of the hybris are forever destroyed and the useless slime is to be thrown away. Unless you’re female, you are not getting the hybris inside.

Hybris Explosion – The correct way to get impregnated by the hybris is by letting it erupt into the female. An incorrect and dangerous way is in insert the egg whole into her vagina.

Insertion of such an egg into the woman’s vagina will coat the completely submerged egg with her hormones, making the egg erupts and explodes inside her. The mutating agent and quantity in her body is far more than recommended at once. This usually leads to unprecedented sizes or extreme mutations, and as such this method is best avoided for a safe transformation.

Incubation – Once the female has had the hybris merge with her body they begins to fuse together, and so begins her mutation into a sexually dynamic creature. The process to change can occur constantly in her life, but after approximately 1 year her general shape and size will have been finalised.

The following section is information which is considered extra. It’s not essential to learn, much like the rest of the iG story and background, its fun but hopefully interesting. It recommended that if the above section has wetted your appetite that you use your own imagination to fill in the blanks beyond.

The extra information is for anybody curious about the hybris eggs and effects it has beyond the normal text – I’ve put it in a section below as I did not want to weigh the main information down with the extra bits of information. Still is there if you’re curious.

Origins – Originally found by fishermen who were drawn to an unfamiliar location by some spherical items caught in their nets, these items were later named as ‘Hybris pods.’ Cut and opened, inside they found and named the objects known as Hybris eggs. They were sold to the scientific community as nothing like them had been seen before.

After an accident revealed the possibilities of both the ‘pods’ and ‘eggs,’ they were investigated further. This potential eventually made a business model for sexual evolution; allowing companies to make a vast amount of money on this ‘product’. See the iGAPES Timeline for more information. (LINK)

The origins of the egg have yet to be identified but are mostly found randomly on the sea floor. An abundant crop of hybris pod / egg has been around the Japanese isles.

Probes have discovered what they believe to be the source of the egg and the pods. Created by some growth, like an abstract tendril, it was dubbed a hybris tree. These tendril like plants grow only in deep, wet and dark places, and emerge to release the eggs before submerging into the seabed once more. From the limited light of the probes, the surrounding area around the trees appears somewhat transformed too. 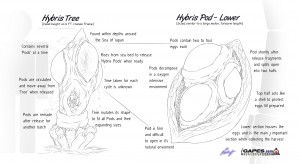 Hybris Pod – The first item to be found from the sea. It houses the hybris eggs and also some hybris seeds. Its purpose is to make sure the hybris egg is not damaged.

Along with protection, the hybris pod is functionally designed to be swept away from the hybris tree proximity, seeking to be found further away. If it was not for the depth of these eggs, they would have likely been found generations ago.

Hybris Egg Redux – The hybris egg only reacts to females. The nature of the reaction uses ejaculation and her hormones to react and gain access to the hybris. This is a key link between all the iG change methods and ideas in this world. Though an abstract way to release its chemicals, it’s been a reason why the transformations have been low key or undiscovered to this point.

It is theorised that maybe these eggs were discovered in the past. It is not understood if they were successful getting the hybris out though. The unusual way to release the substance may have kept it a secret until now, but maybe some cases had occurred and not documented previously…

Mass Spread – Hybris is also by design focused on creating more females through contact with other pure females to be changed. From the minds of these females becoming more sexual, and the somewhat infectious nature of the mutations, we today see a very obvious fetishist society represented by the acutely sexual bodies women now have.

Hybris Vs. Female DNA – As mentioned, the transformation to her body is vast and complex. The general appearance on the outside maybe sexually dynamic, but she has changed internally also. Either as a state of evolution, sexual damnation, or a sub species of female, many are now corrupted or tainted into a new existence. The humanity and roots of the changed female are still very prominent with the substance,  origins, and deep rooted sexuality she’s become merged with.

Business Approach – Originally the practice of transforming a female was done as she slept in a clinic, the egg released its liquid under a cover and when she awoke the infected and began her transformation. The perception of an ‘egg’ erupting liquid into her body is seen as ‘undesirable’ and so the businesses tried to hide such elements from the general audience.

As time moved on and the demand for hybris grew, competition became greater. With competition came the desire to create a more effective method of changing these women. However, as competition became greed, corners where cut and prices slashed to compete. As a result, hybris eggs where no longer just a clinic only method of transformation, and the eggs were released to the public where things quickly started to get beyond corporate control.