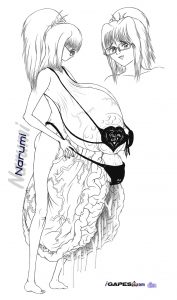 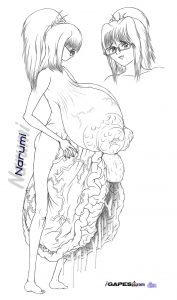 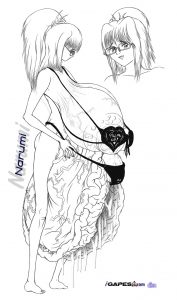 Another shot of Narumi. It was sure looking like this was going to be a main girl I’d use. The side pose isn’t too bad actually and her dominating body came over well from this.

Unlike the 1st image of being mostly ‘doodle’ rough, this one is outlined. However still a few problems going on here along with the lanky frame on her once more (if only I added a little more meat to key joins on her.. *sigh*)

However while playing with the layer files (seriously, what is going on with the layer in my PSD’s here?!) I found I’d done a outline of her frame and did her pussy 1st and so could ghost it which is a idea I use how to show how her legs and frame work even under all the mass of pussy and tits.

I can see this shadow effect being ‘off’ under her arms where I’d orignally had her arching much more forwards… but hay, you can see the top of her pussy ghosting and even her naval pussy under it too. So while its a bit off, I can see where this is coming more into effect as time moves on. Neato.

Also adding clothes to character with very huge hyper body parts = effective when done right and reminded of that with her swimware.

Probably have been easy enough to do another silhouette fucking pose on this one but again… didn’t make it past the doodle stage at least. Maybe for the best… also, hate how I tried to put her name on the side of the body. Don’t do that!