Hay Everybody – Been a while, sorry about that! Thanks for hanging around, waiting for something new…

So January was a very good month all in all and even excelled myself in key areas, both RL and clocking other aspects too and making improvements, slow as they maybe.

Poll – Live Art Casts / Video – So this is something I’ve considered going more into… but I just don’t know if there is any demand for it? I DO need your votes here.

So creating this stuff takes time, but it can be a fun time too. It can take hours to put something together, but at the same time there is something… hypnotic almost watching it come together.

Ether on piczel.tv or picarto is what I have in mind OR maybe recording it and video editing it. or… both?… or maybe neither. Help me decide.

Video – Ether from an archieve of it, or maybe an edited video of the art created before your eyes. Watch any time, but no live interactions.

None – Ether not interested, not the bandwidth or other reasons, an honest thing saying you’d not look at the video or stream ever.

Errrr… – So it wasn’t till the other day that I noticed here and on my discord group there hasn’t been much push publically to show off too many art works ¬_¬ I’ve been unfocused in this area – so let’s at least explain whats going on to keep myself in line if for no other reason.

Bad for Colouring CG – Lately I’ve done much art, like always…. and despite making a good start with a splash of colour on them lately it’s died down suddenly. Honestly I was a little demotivated by lack of care and interest from people and made me reflect if putting all that time and hours into it was worth it?

I should / will carry on regardless, but that is a reason why its been limited lately and as a result limited new stuff being pushed out. I’ll be getting on this again shortly, but… you know… if you like it… a little thumbs up on this site or a message on discord might in ways you don’t expect and help get new stuff out quicker at least.

Bullet Point Round Up! – Quick, fast and nasty of things on my mind that I could drone on about… but won’t because…. 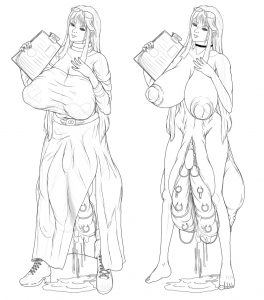 New Art – Not much here today but don’t worry. I’ve making a list and trying to get back to a release schedule or get older ones out. See that list is real… it’s made of pixels.

Better Poses – Reducing Hyper sizes (Drawn so many to personal burnout!) and trying smaller but still huge girls with better poses. Happy with results. shown off shortly. trust me, still looks good even if smaller!

New Growth Idea Lore – Added ‘Hubris’ a bi-product of Hybris that slackens the elacticity in the skin, swells up the vaginal region and excellerates its size leading to becoming huge or a full gaper. Fun lore reasons for silly hyper gaping. Might appear in art as captions? – <iG Lore Hubris>

The Legacy of Foxy – While working on Punk / goth / cybrepunk / steampunk designs (really fun stuff actually) reminded of all character ‘Foxy’ and her encarnations. Will hopefully have a fun post and art on the ‘Fox Pack’ soon with latest versions.

Futanari Artworks – While I’ve not updated the released Reactions website just yet I have prepared some new art work that will get updated shortly. I need to complete some work firstly before I do and clock off a started girl idea too (like much iGAPES work) and then it’ll be ready and updated.

While Futa / hermaphorodite / weird art work isn’t for everybody, for others look forwards to that coming up hopefully soon. It’s been years and is really fun to return tback too.

Just perviews here, but some proof to my words.. (or if you ask politley on discord there is a chance you can see early maybe) I’ll consider adding colour to them if there is time…. 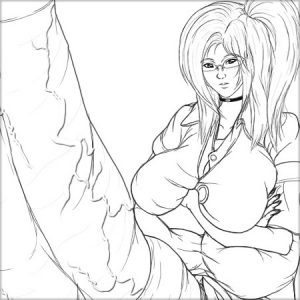 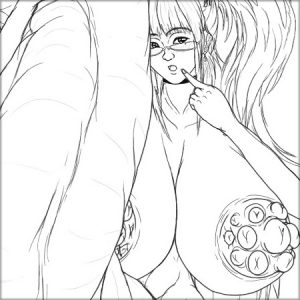 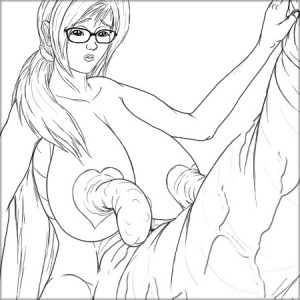 Links – I’ve added a few more stretching based art sites and bits into the side links, but also below. These are….

https://arkstorm99.tumblr.com/ – photomaniplations of preggers lactating and gaping lovely stuff all around!

http://letadraws.tumblr.com – Loads of parodies and used up gaped cunts, floppy tits and other goodness here ^_^

Thanks again for taking the time to vote in the above poll, interact or show support though the discord group and generally be patient and awesome. – Sius