Ladies and Gentlemen, thank you for your support and input once again. I have one more poll that’s more a insight into what my viewers want and if you could vote once more I’ll be able to take the results into account in upcoming art / stories. The input from all so far has once again blown me away, and I can’t thank you enough!

New Art BELOW – I’m going to leave this poll at the top of the site for a little while, don’t like hiding it so much, so be on the lookout just below for some new art. Looking to release the ‘Twang Wang (01)’ set soon – Spoilers, its a set of monsertously sized big cunted women, sorry to ruin it… ^^ Be looking to release a image as they get done and a total selection of all the girls the end.

Explain ‘Gaper Eggs’ –  A weird fun twist on pregnancy. I had always in mind certain women who would birth these ‘eggs’ or orb like things for lack of a better term that would only hatch inside women when inserted, causing her to change into a gaper. I always had the idea of the ‘mothers’ in the back of my mind being able to convert another to be a igaper type. Not every girl can do it, but certain times or select women gapers can do it. Hopefully may clear up what that means.

So thanks again, vote for me and I hope to see the results soon! – And now time for feedback on the last poll, the bio-science change possibilities… So lets see (Click below to read mores) 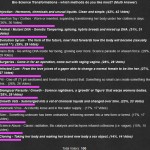 100 Votes strong – So now we’ve kind of hit the critical level of votes for the poll I’ve decided to reply on the result as they stand right now – However I will leave this poll up for a little longer so people can still vote if you want ^^.

So I’ve been once more really delighted by people voting, it’s helping my out what elements to focus on in text, possible stories and also an alternative version to the hybris change methods I’d come up with – think I’ll use the Hybris concept mixed with these much easier methods of changing – less fuss, more fun ^^

But yes it’ll guide me and let me know what you want to see or hear about in the art and it’s been a little eye opening in some cases – sometimes for the better, sometimes the worse ^^ The results were certainly fun to see come on in too!

I saw that some people only voted once, while others votes on near all of them – as a result (and with so many to pick from) its make just getting a few votes more important than getting close to 100% here.  Getting 25% or above was a good enough to be considered ‘successful’

For my personal choices for ideas I like myself would have been ‘Injections’, ‘Cloning’, ‘Growth tanks’, ‘Animal / Mutant DNA’, ‘Evolution Serum’, ‘Infection’, ‘Growth Bio nightmare / Parasite’ – Along with the results I’ll add my input.

Injections – Edged out to be the top answer, and in a way I’m pleased to see it – sort of. Injections to cause monster vagina growths is very simple concept to draw and explain in stories, almost too simple… but glad to see it up here.

Insertion Toy / Clothes – I’m surprised to see this anywhere near the top in truth. But yes, something women can ‘ware’ which changes them inside due to a few options seems to be a hit, so I’ll be sure to use this a bit ^^

Animal / Hybrid DNA – Not sure if people voted on ideas of women and a whale pussy mixed together is what people want OR more the desire for me to draw furries – something I don’t plan to do unless a one off really… but whale pussy, what’s there not to like with this idea!

Evolution Serum – This was a last minute addition to the list and pleased I added it. Sure you can say it’s more or less the same as the injections, but this implies that this is more a future state of women or something women could become naturally that people like the idea of. Fun idea to play with, love it!

Nano-Bots – Again, big surprise how much voted it was. Nano-Bots are another fun way I guess to explain it in basic terms and say it can be controlled by man to make these things and generically alter on that level – can’t complain makes my life easier than some deep hard reason for huge gaping cunts on girls.

Surgery – Few more votes than I would have guessed. The how and why this is possiable, but the idea of booking a placement and being able to come out transformed and sexually changed like this is fun and again very easy to setup, so pleased.

Infection – Another one I enjoyed to see, the idea of it being like a sexually transmitted infection, except the infection is more a radical body sexualisation! Again, I’ll be using ‘women with dominant strands’ – so only select women can do it, but it means I guess any woman who enjoys the company of girls like this may become more like them for these reasons.

Pill – Doing okay, like the injection it’s another way to quick and easily change a girl, just swallow this hon! – but the injection has an air of evil and unknown and malice attached I think. Of all the easy ‘science’ changes, this looks to be the least popular.

Biological Parasite / Growth – Just at the bottom of what I’d say people want to see. I imagined this to be a science made bio outbreak of sorts and a mixture of the corruption fetish. This had the hardship of not being easy to explain, so least I can say something here of what’s on my mind …

I imagine it being more like a ‘place’ or ‘background setting’, like biological flesh (that looks vaguely like inside a vagina) coats the walls and changes women, suckling off their vaginas, making them swell out.

I’ve had ideas of this having a hive mind, converting women, sticking them to walls, pools of liquid that change women and even have it spread out with select Alpha gapers (huge huge sized growths) end up becoming a living cave like this… So much fun to be had here.

Growth Tanks – Not doing as well as hoped. The idea of being submerged in a huge oxygen rich water liquid and day after day growing and changing in this stuff looks really fun to draw! But noted, I won’t go crazy on it from the poll result.

Manmade Virus – The other version of the outbreak, but more ‘it got out’ and that’s why this whole town has started to change without reason ETC. Not as much interest here, not sure if this makes being a gaper less exclusive and so cheapens the kink of gapers? Ether way, noted for the future.

Alien – Not doing well here, and probably for the best. Not my idea of fun, having a figure or being that converts women. Not alien like a ‘get away from her you bitch!’ type, but more ‘the unknown’. Maybe like a mutant gaper woman or from a long lost civilization or something.

Science Abuse – Not so much a method, but more ‘science talk’ a way as to why she now has a cunt that can swallow a exercise ball. I take it people like proper reasons why changes happen – Or so loose and simple that the science talk don’t need to be focused on – big result, pleased!

Clones – Sad to see this one get so low on the list – I guess I maybe the odd one out here. Again, maybe it’s the lack of detail and SOUNDS like it goes against what makes sense, but here is what I took from the concept.

Had in mind rich or important women who did it to see what their bodies would be like without the risk of losing the original – 2 ways here, one of another version of her going around having fun, so much so the original gets jealous and the clone kinda makes more impact and splash (and the fun you could have with a story there)

2nd idea of the body being made and her mind being moved over from one body to another, the new sexual mega gape loving body soon becomes more loved than just a ‘toy’ for the weekend, and soon it slowly become her main body (maybe with her normal body basically breaking down from lack of use) – So really sad you guys not see this one… may just use it to spite you all!! (you’ll all see!!)