One to One – I think its time once more for a, what’s on my mind, what’s going on with iGAPES and my work and so on – so let’s begin! [THE POLLS ARE BELOW ALSO]

Work Produced Vs. Hours – Recently I’ve changed the way that I work and make art and manipulations, more a mindset change and its working out pretty well! My productivity has increased and I’ve gotten quite a bit of work done (though its NOT QUITE in a position to be released just yet. Sadly, more on that in a moment.) . I set myself weekly goals, and though these ambitious weeks fall a little short the work done is quite a bit for me, and so just needs a little TLC to finish it off.

Bottle Necks – I’ve however found that just right now I have choke points in my work where I need… input for lack of a better term. I have created quite allot, and some is on the tip of being released (bah! for me being a perfectionist), but something just holds it back, and that’s kind of me wanting for feedback, help and input or opinions from other people before their all released and set in stone and so on.

Limited Feedback – The problem is quite simple, on this site there’s only a few people I kind of can turn to for this help, there’s only a few who have volunteered for it. (unlike released reactions, where there are more willing) Of them few, sometimes just getting a quick response or an answer can take days or weeks (then again, its an answer to something I can’t do myself, so I can’t judge there too much) but generally production halts to a trickle of what it is. I also get motivated to do more the more people make a fuss over material I make as a rule too.

Projects, the Endless Projects – I recently made a list of all the outstanding things I need to do and have started. The list was… big, scary big. Some fun things made and things coming up. We have a few sequences, usually with growth in mind – sets of girls which need captions to add a little more to the image – Short story started with a set of characters drawn to be illustrated and things like more ‘world’ details; which is fun to explain why giant pussied females walk the earth in this way.

Close but not Quite – It’s all my doing. Starting something and not completing it is something of a horrid habit, or maybe something happens (like waiting for somebody to get back to me, and using my time wisely to make something new in that time, but I digress), I get inspired and then get inspired by the next thing after that and move on, adding to the list. So my goal is to get back to the outstanding bits and finish them off – but that USUALLY leads me to the problem of me needing feedback or an alternative view to help out LIKE BEFORE. Who’d have thought it’d be this complex originally huh?

Another call for help? – I guess it is, once more, looking at what I’ve just written. I could really do with people who are happy to offer input and help. Sometimes it’s with the art itself, reviewing it or adding ideas to what I’ve started, sometimes I could do with people just to read what’s done and judge if it’s any use. So I guess if you can help, you know… just drop me an email – email@igapes.com and we’ll take it from there.

Question of Numbers – The other issue I have is because my limited releases on the site so far , the odd story and maybe a manipulation every so often, and next to no promotion (and let’s admit it, there’s limited places that deal this fetish area to promote in, EVEN if I was promoting now – breaking into this unique fetish was never going to be easy ^^) but generally the people here who have the faith will be rewarded in time, and so I want to do something… more for the community as such. This hopefully will show I’m still going and maybe something others will get into and be inspired to come over to iG and all that jazz.

Gapers Poll – I have to admit, since I made the poll recently I’ve been pleased with the votes that have come through – keep up the good work people! Iwill release a poll which I will then draw the results of and release it soon, maybe independent to the iG background and generally reward the people who have been supporting me all this time – and get something out and done! So my plan is to use the poll as a voice… but I need help first.

(Submit A Character…) then vote to win! – The first poll of this kind will be something I NEVER do – but will do as it popular with people, and that is the idea of me drawing a gaping iG like version of a famous character, a PARODY image… I know, I just blew my own mind huh

I’ve done a very quick size compare, these are the GENERAL sizes your voting on, to give you an idea – all kinda using the bulge protruction of pussy design, though this maybe used its more a scale idea for people. Hope that helps make you make up your mind.

I’ve also stopped taking ideas for other characters now – so the characters here are the only ones to vote on in this poll this time – so pick your favourate if you’ve been waiting also. 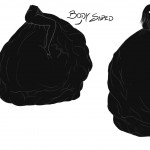 Above –  we have a ‘size’ you’d like the character to be drawn at. As stated, bigger maybe not always best – but I’ll see what you people decide. I’ll pick what to do with the character myself, but this will heavily influenced by results.

As for characters… I’m just going to pick some generic ones (its really something I don’t think on or have a great yen for, so acme ones it is)

Characters so far with links to see who is who –

(0) Chun-Li – From Street fighter. I swear its like law she be included in every list like this…
(0) Cattleya – Queens Blade. I’m sure I could have fun with this girls design!
(o) Tifa Lockhart – Final Fantasy 7. Because Fuck Arith Gainsborough (Aerith) and you indecisive name!
(0) Major Motoko Kusanagi – Ghost in the shell. Just how solid is her state?
(0) Samus Aran – Metroid. You say some accident happened with her morph ball?!
(o) Taki – Soul calibur. Not sure this pussy growth will help with her stealthy ways…